Melee builds aren’t exactly popular in Path of Exile but that doesn’t stop build enthusiasts, especially those that prefer the excitement of close combat. Common weaponry for such builds are swords, maces, and claws, but axes, not so much. Nevertheless, builds that use them are equally good, so it’s worth it to buy POE Unique Axes such as Sinvicta’s Mettle and many others. 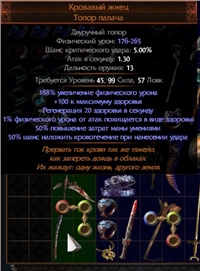 Unique Headsman Axe 45LVL and other many interesting things

Sell Your Products
About Path of Exile Axes

Long-time players already know how items are mostly obtained in Path of Exile: looted randomly from specific monsters. The same pretty much applies with axes. The problem with this is that for those looking for a specific axe, it can take some time and quite the luck. A common solution to this is through POE Trade, where players give an item of equal value.

Some players who don’t want to do this, or don’t have anything to trade might decide to buy POE axes from other players in an online marketplace. Here, other players create offers for their axes (among other items) and buyers browse through until they find an offer that suits them. Once they’ve ordered it and organized delivery with the seller, they just have to wait until they receive it and confirm delivery.

What sets axes apart from other melee weapons is that it doesn’t have an implicit modifier. The exceptions to this are certain Unique Axes, and even then, those that do are the vast minority.

However, what the axe lacks in that particular aspect, it makes up for it with higher raw damage. In fact, this particular trade-off is why certain builds work best or even only with axes. Also, much like swords, POE one handed axes have a two-handed variant that occupies both the weapon and off-hand slots, but this is compensated by the even higher raw damage.

There aren’t too many builds that use axes and POE two handed axe, but they are good choices that can run a great variety of content. It also helps that there are certain nodes in the passive skill tree that increases axe damage.

Here are a few examples:

With those examples, it should be easy to see that axe builds are simple yet reliable and versatile, making them a good option if you want a chill but fun grind, especially in the endgame.

What POE Unique Axes to Use

Among these axe builds, many rely on Unique axes and POE Unique two-handed axes. Much like other items in the rarity tier, they give out bonuses and effects not found on any other rarity tiers, and even from other items that are also Unique. After all, it’s called as such for a reason.

Here’s a list of Unique axes POE and two-handed axes:

There are many other Unique axes, and with their one-of-a-kind modifiers, plyayers can get creative and make a build yourself.