One way that gamers have found to demonstrate their wealth and strength in one go is with Noxious items. Sure, it’s only the third-best two-handed weapon, but it’s the easiest to get. Some players who might not be able to take on Araxxi or Araxxor in battle or are unable to farm enough gold to buy a Noxious Scythe sometimes look for online sellers. 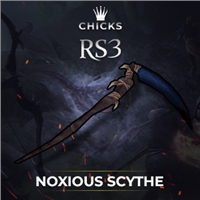 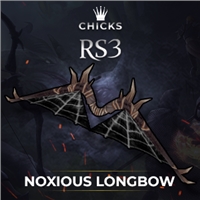 What are Noxious Items?

Noxious items are what players call the items crafted from Araxxi’s parts. Players combine the leg with her eye, fang, or web, creating the Noxious Staff, Noxious Scythe, and Noxious Longbow respectively. Despite being from different styles of combat, they have a few common characteristics.

First, they all have the same Special Attack, Mirrorback. By using up the whole bar for adrenaline, the player summons a Mirrorback Spider. It has 10,000 HP and will divert half the damage inflicted on the player to itself. Also, the damage it receives will get deflected to the attacker, except for those immune to deflections or attacks that cannot be deflected. It will do so until it expires or its life bar gets depleted.

The second is the ability to be recolored by a few dyes. Barrows, Shadow, Third-Age, Blood, and Ice dyes from Treasure Trails may be applied to the weapons. This is a purely cosmetic change. It will not impact the weapon’s abilities or combat potential. Be warned that dyeing the weapons will render them irreversibly untradeable. It does make the weapon’s value spike but making it untradeable makes it moot.

Why Do Players Buy Noxious Weapons?

One of the most common reasons a player chooses to look for a seller that they can buy Noxious weapons from is because they want to avoid all of the fighting. They might not have the GP to supply the battle, skills to complete the battle, or the luck or patience to rely on RNG In order to obtain materials.

Another reason might be because they’re unable to grind for that amount of gold in game themselves to buy the items on the GE. These are expensive items and saving up enough gold to buy them on the Grand Exchange might require a time commitment that some gamers are unable or unwilling to provide.

Gamers who are considering getting involved in online trading should ensure they have read the policies, rules, and terms and conditions of a game before continuing.

Where to Get the Ingredients

Fighting Araxxor and his mate, Araxxi may reward players with the necessary ingredient. As mentioned above, Araxxi’s Eye, Fang, and Web would have to be combined with a Spider Leg to make the weapons. However, the Spider Leg is also made up of three parts, the Spider Leg Top, Spider Leg Middle, and the Spider Leg Bottom.

Araxxi has a chance to drop all of these components, and the player has to assemble the weapon. Assembly requires 90 crafting and all the materials. That means fighting the spider couple many, many times to collect everything needed.

The battle starts with facing Araxxor. Players may choose to pick a path to fight him in, and that influences how the skirmish will go. There are three possible paths, but only two are available in every encounter. This also changes what abilities Araxxor will use throughout the fight, though he’ll use attacks from other paths at phase three. At any rate, the fight lasts for three phases, and upon defeating him in the third phase, Araxxi will appear.

She will eat the corpse of her mate and start the fight with the player. Essentially, the battle with her is the fourth phase of the fight and gives a harder challenge than Araxxor. She has access to most of his abilities, accompanied by some of hers besides. Mobility isn’t exactly her strongest suit, so she’ll likely stay in the middle of the battle area. That makes it easy to avoid her melee attacks, but she’ll use the ranged attack the player isn’t currently protecting from. Combine that with the aforementioned Araxxor abilities, and challengers are in for a grueling fight.

Players may have a friend accompany them in the battle. However, this also strengthens the spider couple’s strength. Weigh the pros and cons before deciding whether to fight them solo or with a friend. The ingredients for a powerful weapon or even the chance to get a pet is at stake!

another great transaction, been faster than usual! thank you!