Whether you’re in a galaxy far, far away or in your room playing SWTOR, you’re gonna need copious amounts of Star Wars the Old Republic credits. So channel the raw power of the Force and get cheap SWTOR gold via PlayerAuctions. Check out the offers page, and may the Force be with you! 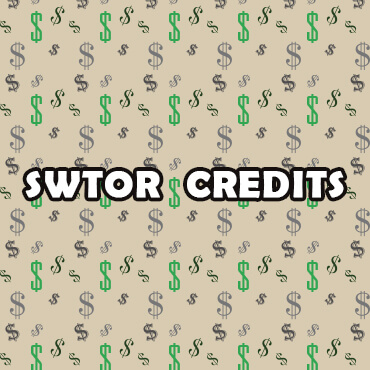 Even if the Force is with you, it can still prove to be difficult to acquire all the SWTOR Credits (sometimes referred to as SWTOR gold) you need. This is especially true if you don’t have much time to play. It’s a good thing that at PlayerAuctions, you can buy SWTOR Credits at affordable prices from other players. That means you get to save time, money, and effort required to farm and grind it out!

Is There a SWTOR Credit Cap/Limit?

If you have plans to buy SWTOR Credits from us, keep in mind that the game has a credit limit/cap. To be precise, the cap simply means the maximum amount of credits your character can hold at a given time. The rest of your credits go to an escrow account, which is only accessible if you’re a preferred player. Currently, it’s 250,000 for free-to-play players, and 350,000 for preferred players. This is to ensure that the in-game economy is controlled and limited.

Due to this on-hand currency ceiling, players can only buy a limited amount of credits at any given time. It’s a bit of a hindrance, but the convenience of purchasing instant SWTOR Credits very much outweighs that. To paraphrase Qui-Gon Jinn, (limited) credits will do fine.

Star Wars the Old Republic Credits: How to Buy

Buying SWTOR Credits has never been easier. Simply log in or register, and then choose the offer you want. After clicking Buy Now, you will receive an onsite chat from the seller, where you’ll be discussing the date, time, and place the trade will happen. When deciding, make sure that you take the time difference into consideration as you and the seller may be from different time zones. There's even a range of payment options including Apple pay and Google pay for you to choose from!

Once the transaction has been completed, confirm it with us so the seller will receive his or her payment. Congratulations; you’re now a few hundred thousands of SWTOR Credits richer!

Sell Your Products
About SWTOR Credits

From the stunning success of Disney's Star Wars Sequel Trilogy, to the unparalleled Star Wars Rebels television show, to the entrance of Star Wars into the MMO field with Star Wars: The Old Republic, the Star Wars fandom in a way it hasn't been since the series' inception back in the late 1970s.

It's really no surprise that a Star Wars MMORPG would exist, with the popularity of the universe and the tremendous amount of Star Wars games already out there. When SWTOR came out in 2011, big things were expected from the game. Big things were just what the fan community got from Star Wars: The Old Republic. With many praised updates to the game in the ensuing years and millions in overall revenue, SWTOR hasn't been just a bonafide hit MMO. It is actually the 'fastest-growing MMO of all time', gaining over one million subscribers within three days of its launch.

Using the vaunted and beloved Star Wars universe as its background, SWTOR plays up the classic Star Wars conflict between the forces of good and evil, this time represented by the Galactic Republic and the Sith Empire. The story is set about 300 years after the game Star Wars: Knights of the Old Republic. SWKotOR itself is set thousands of years before the films. The conflict you partake in by playing the game involves the Jedi moving away from the capital city of Coruscant back to their original home world of Tython, where they seek to regather their strength after a long war. As the Sith Empire seeks to expand, and the Jedi and the Galactic Republic face conflict on their own planets such as civil wars and politics, a dangerous cold war begins in the galaxy.

Players find themselves dropped into the middle of this epic conflict, and while they choose either to be in the Republic or the Sith Empire, characters can actually be of any morality they like no matter which side they choose. Players can also choose between eight combat classes, which are based on traditional Star Wars universe character types, such as Jedi Knights, Smugglers and Sith Inquisitors. Within each class there are various subclasses and companion characters that can be accessed. In addition to class and faction, the player will choose from ten species. There's also an extensive storyline in the game through which the player can actually affect for other players by completing quests and otherwise interacting with the world, which is an innovation the game boasts.

What is Star Wars: The Old Republic Credit?

The primary SWTOR currency is the Galactic Credit, which players use to buy everything in the game, including items from the Galactic Trade Network (SWTOR's virtual marketplace/auction house where players can spend SWTOR credits on items sold by other players) and from vendors on various planets the player visits.

SWTOR currency is earned in typical MMO fashion through completing quests and by selling items gathered during exploits, but also like other MMOs, this can be difficult and time consuming if a player isn't an expert at the practice. Even excellent SWTOR players can find it hard to come by enough Galactic Credits to make the purchases they need. Typically, the players that make good money in this game spend hours upon hours staring at the Galactic Trade Network looking for ways to exploit changes in the market to make money, which is both hard to do and extremely tedious.

Besides spending hours grinding quests or studying the Galactic Trade Network to become a Star Wars stock market genius, there's another way to get SWTOR currency.

This method is called PlayerAuctions, and it is the go-to destination for cheap SWTOR credits on the web. We're a service that provides SWTOR players a link to professional gamers who have SWTOR credits for sale. We make it easy and, more importantly, totally safe to buy these credits from our pro players.

Think of our system like eBay's: when you buy something, your money is held in escrow until the transaction is completed on both ends. You can scout out the best sellers by checking our seller rating system. Your identification is kept secure at checkout by our special PlayerGuardian system. You can also hit up our customer support team at any time to get any issues resolved, or if you have any reservations or questions.

When buying SWTOR Credits from us, it’s important for you to be careful not to buy too much at any given time. This is because Bioware is closely monitoring players for sudden increases in their SWTOR Credits. Thus, it’s better to have multiple transactions with smaller amounts spread throughout a certain span of time. Also, if you are planning to get credits from the same buyer over and over again, make sure to change the time of day if possible.