Feel the icy embrace of Neverwinter! The action and adventure never stops in the Forgotten Realms. For those who need to raise character assets, they can do so by buying Neverwinter Astral Diamonds from other players. Adventure, glory, and immortality beckons, so stock up on NW currency and rise above the paralyzing frost! 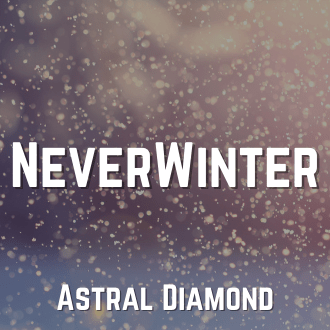 Neverwinter has several currencies players can use in-game. Zen and gold are two of these and the most important. Players want to be powerful in the game then you need to have Zen and gold. To get both of these, they need to have a lot of Neverwinter Astral Diamonds. Thankfully, they can buy from fellow players.

What are Neverwinter Astral Diamonds?

They are a special currency in the game. It is used to buy items from the Auction House and can be converted into Zen. Having plenty of Astral Diamonds will allow players to buy the most powerful items in the game. Best of all, you save time and have more fun.

On the other hand, players that already have a lot of Astral Diamonds but want to make money can sell them to fellow players.

The Price of Neverwinter Astral Diamonds

Sellers can put any price on Neverwinter Astral Diamonds. It is, however, recommended that they follow current pricing trends to ensure that buyers will choose to buy from them. Likewise, buyers are encouraged to go for sellers with fairer prices.

In some MMORPGs, there is a form of currency that is separate from the usual gold or staple currency. Neverwinter is one of these; and in the game they're called Astral Diamonds. Neverwinter Astral Diamonds are important for a wide variety of reasons, so it's vital to know where and how to gather them. To get these necessary bits of info, read on.

Gold is used to buy items and equipment; astral diamonds are, too. However, these diamonds can't be passed from one player to another, and they are the main currency that players use to purchase and sell items in the Auction House. In fact, the most powerful equipment, which are important for endgame content, are bought using this particular form of currency.

The first one would be through salvaging Items. After the release of the Fury of the Feywild module, the first ever major update of Neverwinter, players have been given the option to “salvage” epic equipment pieces that are level 60 and above and have “Salvageable” written on their tool tip. By doing so, the equipment is destroyed and then yields a number of rough astral diamonds. The other way would be by finishing skirmishes and dungeons, as well as when competing in PVP. Either way, the important thing is to gain Rough Astral Diamonds, and later on get to refine them to get regular, spendable Rough Astral Diamonds. Do note, however, that the regular Astral Diamonds that will be the result of the refinement is still counted on the thirty-six thousand Astral Diamond limit that is set daily.

Astral Diamonds: How To Gather

Next would be obtaining regular Astral Diamonds. To obtain them, sell items in the Auction House. But don't just stick to selling, as it’s possible to gain more Astral Diamonds by buying out certain items that are sold cheap, and then selling them for a much higher price. With the control of the supply on the player’s hands, he or she will be able to dictate the price of that particular item. Another way would be selling zen, currency which is bought from the game itself using actual money, in the Astral Diamond Exchange, a system that allows players to trade their zen for Astral Diamonds. The exchange depends on the players' desired rate, but there is a limit: 1 zen can cost 50 Astral Diamonds minimum, and 500 Astral Diamonds max. In addition, players can also trade in up to 5000 zen max. and can also give idols to Rhix, an NPC that informs about and gives players specific rewards for certain actions and events. Depending on the lockbox which the idol came from, the player can get up to 40000 to 50000 Astral Diamonds.

Last but definitely not least would be one of the best and fastest ways to this much-needed resource: to buy Astral Diamonds from fellow players. This is a fast and easy method, not to mention cheap.