Enjoy the fun of MapleStory in all its 2D glory. Online marketplaces provide both buyers and sellers a safe haven for their MapleStory Mesos trading needs. Check out the listings for the MS global currency market and get the groove on. Experience the wonders that await you on Maple World today. 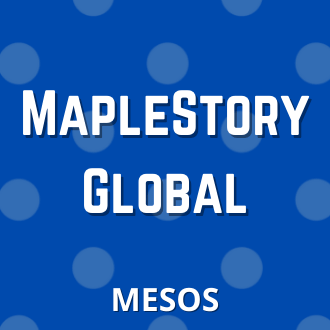 Grinding quests and events for Mesos can be tiring. However, to use the Beauty Salon, Mesos are needed. That also goes if the player wants to start merchanting. At online marketplaces, buyers can get all the Mesos they need. Thanks to a site's policies, systems, and community, they can get cheap MapleStory Mesos quickly, easily, and safely!

As fun as killing monsters in MapleStory is, the game is very “grindy”. Meso is hard to save up. That is why some players choose to buy MapleStory Mesos. When you buy Mesos, you save time; time that you can use to enjoy the game more!

When buying Maplestory Mesos, buyers prefer to do so on a reliable trading platform. That way, they can experience strong security when transacting, enjoy a large community of friendly traders, and cheap prices.

At any rate, buyers should also make sure to read up on the game's policies and rules. No matter how many security systems and failsafes anyone sets, accidents can still happen. Reading up on these can help buyers prepare and react to those. The marketplace's rules and policies may increase understanding, as well as asking the help of legal professionals.

MapleStory Mesos: How to Earn

One of the best ways to earn MapleStory Mesos would be through party quests (PQ), quests that parties can do together. Do note, however, that Party Quests have a time limit, so the player and their party have to move quickly.

In the game, there are a lot of party quests, and each of them varies in the amount and quality of loot they yield. So when players are joining a Party Quest, they have to make sure that they choose one that will give them proper loot. In addition, players ought to stick to Party Quests that are appropriate for their level.

For example, if a player is between level 10-20, go for the Henesys Party Quest, because its bonus, Pig Park, drops noticeably rare items that they can sell at a great price. And when you're around 21-30, go for the Kerning Party Quest, as players can get DEX scrolls from it, which can sell for 200k-500,000 Mesos; sometimes even 2 million!

On the other hand, for players that are not a fan of Party Quests, especially if they're a soloist who isn't into dragging or joining other people, then they can take on Daily Bosses. Zakum, Hilla, Ranmaru, Von Leon, Easy Magnus, Easy Horntail and Easy Gollux are all good examples of bosses that players can take down alone. They drop items like Sunset Dews, Power Elixirs, and Elixirs, which can be sold to NPCs for a high price. Sunset Dews sell for 5100 mesos each, Power Elixirs sell for 2500 mesos each, Elixirs sell for 1000 mesos each, and Reindeer Milk sells for 2750 mesos each; have enough of all of these and players can earn up to 2 million Mesos. Conversely, they can also use these items as healing items, allowing them to save up on their potions.

Or maybe the usual hunter-gatherer in order to kill monsters and sell their loot routine isn't the right profession for the player. That's alright too, as there are two other ways for you to earn that much-needed Mesos. Players can choose to craft items that fetch a high price in the Free Markets. Good examples of these would be Dark, Black, WIS, or LUK Crystals, which sells for around 500K each. On the other hand, they can choose to be a true-blue merchant who controls the economy by buying and selling. Yes, buying, as the strategy behind this method is by buying out the stocks of certain items that are being sold cheap at the Free Market, and then selling them at a much higher price. Once they now have control of the supply, players who need the item have no choice but to buy it at the price that they set.

Last but definitely not least, players have the option to acquire MapleStory Mesos through third-party websites. Yes, that's right; it is possible for players to purchase Meso with real money. Players no longer have to go through tricky Free Market maneuvers or grind Party Quests or bosses. Plus, there are also a lot of MapleStory forums out there where players love to trade with one another. There is nothing like getting hard-earned Mesos; unfortunately, not everyone has the time and energy to earn it themselves. This is why there are buyers and sellers for MapleStory Mesos. The number of them just keeps on growing since MapleStory is a game that has captured the hearts of many youngsters due to its cutesy graphics.