Dare to take up thy burden and bear the One Ring to rule them all. Players can get their fill of LotRO gold so long as they put in the work for it. If there's one thing that beings who live in the world of LOTR love, it's gold. Who doesn't love a shiny, shimmering, and splendid gold coin that can bring about the riches and the finest of wares? 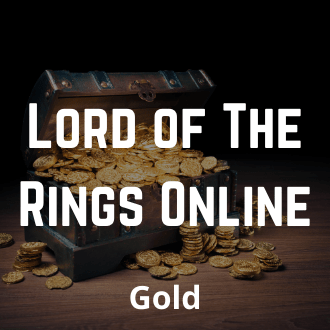 Getting Gold for Lord of the Rings Online

Money makes the world go round. As for “Middle-Earth,” well, let’s just say its currency counterpart and gold wasn’t a big issue lore-wise because the elves had so much funding that “The Fellowship” didn’t even dent their bank. For everyone else who resisted the Dark Lord Sauron, gold was an important resource, as the war effort didn’t run on charity. If you don’t believe it, try asking the heroes of Lord of the Rings Online about how vital LoTRO gold is to them.

LoTRO Gold: Why Players Need It

The game’s setting, being based on JRR Tolkien’s most popular and most epic high fantasy novel trilogy, needs no introduction. However, here’s the role that players will be playing in the game: a hero that aids “The Fellowship” in finishing their quest and fighting many battles against Sauron across “Middle-Earth.”

As a nifty bonus, they will have the chance to explore “Middle-Earth” in a way that those who have read the novel or watched the movies couldn’t experience. After all, none of them can say that they had fought orcs and goblins, but LoTRO players definitely can.

To be able to do cool things, players are going to need LoTRO gold. After all, they are must-haves for items and for adventuring because they help gamers survive adventures across “Middle-Earth.” If players need a boost, they’re going to have to get some LoTRO gold. There are many ways to earn LoTRO gold. The most common method would be through regular grinding and questing. Another is by selling crafting materials and/or reputation tokens, which both fetch good prices with other players. Finally, there's of course the option to buy from trusted sellers, fellow explorers of Middle-Earth who have high amounts of it, to make the buyer's experience in LoTRO much easier and smoother.

Will use Again fantastic service and speed.

Fast and easy! Thanks for the extras!

Very quick delivery, would definitely recommend this service to others!

Sell Your Products
About LOTRO Gold

In the magical yet dangerous world of “Middle-Earth,” there are those who possess troves of fortune. There are the elves, whose lengthy lives allows them to possess great wealth throughout the eons, and “Smaug,” a dragon who is as greedy as he is powerful. Then, there are Lord of The Rings Online players who farmed more than their fair share of LoTRO gold.

Farming gold isn’t the focus of Lord of the Rings Online. Instead, one should view gold as a resource. The true essence of the visuals and virtual “Middle-Earth” is a game where Lord of The Rings and/or MMORPG fans can both enjoy.

The game, which is heavily inspired by the movie trilogy based on JRR Tolkien’s novels of the same name, puts players in the shoes of heroes who were destined to play a great role near the end of the Third Age. It was a time in “Middle-Earth” when the “Dark Lord Sauron” has once again risen from his slumber and has set his eyes on the continent. Poised to stop him are the free people of “Middle-Earth:” humans, elves, and dwarves.

The true heart of this resistance against this great evil, however, is a rag-tag party. There is elven prince “Legolas,” the dwarf warrior, “Gimli,” the wise wizard, “Gandalf” the Grey, human nobles, “Boromir and “Aragorn,” and the hobbits, “Merry,” “Pippin,” and “Samwise.” More importantly, the hero of the story is “Frodo Baggins.” Regardless of what the adaptation of the lore is, whether it’s the movie, the novels, or this particular game, the characters will always be the center of the lore. If that’s the case, then what is the role of the player? Simple: to follow and help these chosen heroes.

There’s more to the game than just being “Frodo” and befriending many faceless helpers because they’ll be a hero. By exploring “Middle-Earth’s” wondrous lands and fighting every force of evil along the way, players will be able to make a name for themselves. Since this is a Lord of the Rings game, they will have to choose between the four races: Elves, Men, Dwarves, or Hobbits. Each race has its traits and available classes that give it a certain advantage. Choosing a race should not only be dependent on their looks, but on what they offer gameplay-wise.

As an MMO game, you won’t be alone. Join thousands of players who are also looking to make their names on the pages of “Middle-Earth’s” history, with the many quests and conquests that you can take on in the continent.

Cheap LoTRO Gold for Your Quest

Adventuring across “Middle-Earth” and fighting evil, both alone and with the other fellow heroes are amazing and enjoyable endeavors. To be successful in the undertakings of Lord of the Rings, it’s important to have a decent amount of LoTRO gold since players are going to need it to purchase items. They provide defensive, offensive, and supportive capabilities that are necessary for any battle. LoTRO gold is a vital resource, and knowing how to farm it is a must.

Perhaps the most widely accepted way of obtaining LoTRO gold is with good-old grinding and questing. Next would be by selling crafting materials and/or reputation tokens to other players, as they are highly sought after, and therefore, worth lots of gold. These methods are reliable ways to earn LoTRO gold, but they do take quite some time before they get you loads of stuff. So, if players want to earn as much as Smaug in a snap, they can buy LoTRO gold from other players.