Why worry about what trail to take when ArcheAge Gold can guide you? Protect the classes in the city of Auroria with cheap ArcheAge Gold. Having currency from PlayerAuctions can take your magic and power to another degree. Buy gold currency so that you can craft, claim, and conquer your path. 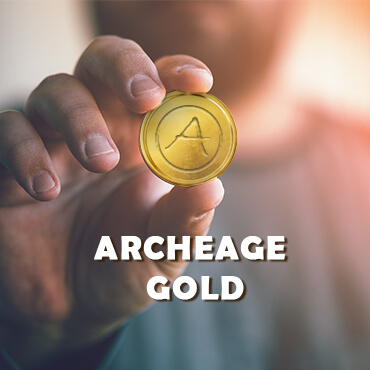 Whether you are a pirate, or are loyal to the Nuian or Haranya alliances, PlayerAuctions is the best place for ArcheAge Gold. Get the gold you need to purchase rare gliders, expand your in-game home, or buy those super legendary items. One of the first AAA MMO's to be developed with the "sandpark" style; this game promises long term growth of users and assets. Get ahead of other players and buy ArcheAge gold now!

Save time or earn money with ArcheAge gold

Farming gold is slow and boring. Instead of wasting time gathering gold, just buy it from the PlayerAuctions marketplace. When you buy gold you don't just buy purchasing power, you also save time and effort. If you already have a lot of gold then sell it on the PlayerAuctions marketplace. With 1 million members you can always find buyers for your gold. Best of all, unlike other trading sites, we do not upshelf your gold and profit from your hard work. Instead, we will help you turn your digital riches into real world money. Earn money the easy and fun way with us!

Unlike many other trading sites, PlayerAuctions is covered by PlayerGuardian Trading Protections. With this system, sellers and buyers of gold can rest assured that their transactions are safe and secure. We also have over 10 years of experience as a digital asset exchange so you can be sure we will handle your orders with utmost care. We know how hard it is to get ArcheAge gold, that is why we make sure delivery is done before we release disbursement. We love hearing from our members. If you have questions or suggestions, please do not hesitate to contact us through our 24x7 Customer Support.

Sell Your Products
About ArcheAge Gold

A Sandpark is the hybrid between Sandbox and Theme Park MMOsthat are designed to flesh out a sand box, open world experience, all the whilemaintaining the tried and true, organized structures of Theme Park MMOs. Onlyone game has managed that and that is ArcheAge.

If you haven't heard of it, ArchAge is an MMORPG developed by Korean developer Jake Song (former developer of Lineage) and his development company, XL Games. As a much touted and hyped title, as well as being one of the biggest games in Korea, ArchAge made its way to the West with the same level of hype.

ArcheAge features an almost limitless and zoneless world; a world where players are free to roam and explore at their leisure. As it was said earlier, this Sandpark also includes the structured elements of Theme Park MMOs such as dungeons, raids, and even certain open world bosses. The game takes the best of both worlds. With a combat system that is a mix of traditional tab-targeting and action MMO meta, ArcheAge takes its innovation to the next level by letting players engage in competitive, open-world PvP combat that can range from small scale skirmishes to full-on guild wars comprised of hundreds. But players are not only limited to personal PvP combat – that's just the tip of the iceberg. Players are also able to partake in epic sea battles with custom built ships to protect, or plunder, the seas in search for ArcheAge gold or other valuables to add to their power.

But the greatest feature of ArcheAge is its handling of its economy. Due to the sandbox nature of the game, the economy is something that you can make a killing off with for gold. With nearly every item in the game craft-able, there is a heavy industry in place, which… for players who do not have the time to grind, can still keep up with their interests if they buy ArhceAge gold from PA (more on this in a bit). Through claiming land, building personal and guild castles, and sheer hard labor, players are able to increase their power base through a number of means like actual farming, and gathering raw materials for trade in the several provinces of the game, all of which are simply done to amass more and more gold.

ArcheAge Gold – The Key to Victory

I'll be perfectly straight with you – you can't win in ArcheAge if you're piss-poor. Scouring all sorts of ArcheAge forums, you will find PLENTY of resources on how to mine, craft, and trade your way to the top if managing a large sum of gold is your goal. This can be extremely helpful for those players who enjoy meta-gaming in SandBox games. Having a heft sum of ArcheAge gold allows you to buy anything… or anyone… towards whatever end goal you may have. If you're broke, forget about raising an army to fight off or invade the lands of enemy guilds, you won't be able to upgrade your personal equipment due to the lack of crafting materials and other items that can only be obtained by trading with other players, and you certainly won't be able to afford your land and castle's upkeep.

Some folks have claimed that ArcheAge is P2W more than any other game before or after it. To a degree, that's true, but only because folks like taking the easy way out and purchase the necessities from Trion's cash shop rather than farming for it or purchasing said items via gold from other players.

This is definitely not always the case. You can still compete with folks with fatter wallets by increasing your wealth in the game in a timely manner. Of course, if you've got the paper to compete with other players, why not do it intelligently?

Cash shop-savvy players know that they can spend a lot in a month for the basic amenities in their everyday grind. Recent cash to gold conversion rates indicate that, if those amenities they buy in the cash shop were, instead, bought directly from other players, they'd save at least half the money they would actually spend. We love being in place to provide the very services needed to connect buyers and sellers together in a player to player driving marketplace

But I get it; you might be afraid of getting ripped off. Since about 2010, one of our mottos has always been “DON'T GET SCREWED”, by trading directly with other players who can take high advantage in digital asset exchange. There are a lot of scammers out there that may just take your money without delivering the gold and bolt off. Luckily, we've been around securing trades for buyers for more than 15 years now.

What in the ArcheAge is PlayerAuctions?

To purchase really cheap ArcheAge gold, simply use the search bar to look for “ArcheAge” or use the alphabetical listing at the top of the page to find it. You will then be presented with a list of numerous sellers with varying exchange rates. Don't be afraid; all those guys are legit! If you want to further ensure the quality of their service, go check out their profiles to see their reputation or their status as Power Sellers. Pick whoever you want to avail gold from so long as you think it's a fair deal.

Once you're rolling in that ArcheAge dough and you've optimally destroyed all opposition before you through your sheer business savvy and combat skill, it might be time for you to try selling some of your excess wealth in PlayerAuctions as well. There are no registrations and PlayerAuctions hardly takes a noticeable cut of your profits.

So what are you waiting for? ArcheAge is a ripe game to dominate! Get your gold now and start conquering the seven seas!