Buyers wanting an edge over other players can buy WoW Dragonflight items. Whether it’s weapons, armor, consumables, or resources for crafting, they’ll find it all on a marketplace. They’ll have to prepare to fight dragons in future raids, and valuable items will help them prepare beforehand. Enjoy World of Warcraft Dragonflight and all the new features! Click here if you are looking for WoW WotLK items. 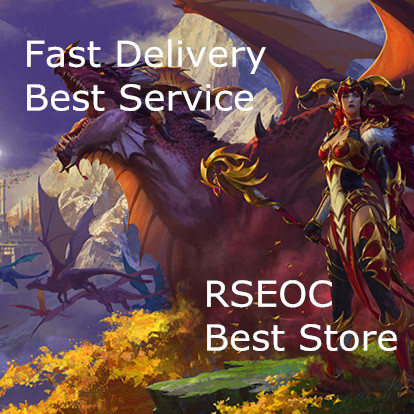 Gearing up in World of Warcraft can be a tedious task, especially once a player turns level 60. That’s where the real fun begins. Especially now that Blizzard has gone back to the basics with Shadowlands, gone are the days where random bonuses like Warforging and Titanforging used to drop. Instead, they’ve been replaced with more straightforward item drops. This makes things much more streamlined when compared to the previous expansions, but by no means is gearing up for the endgame content feel like a walk in the park.

The main goal of every player in World of Warcraft (or at least for Vanilla WoW) is to get to the endgame—that’s where the meat and potatoes lie. Endgame has always been thought of as a hurdle that’s difficult for non-hardcore players to get through. Players would have to level up like there’s no tomorrow, figure out which build is “endgame worthy”, and farm a lot of gold to pay for the gear to top it all off. That being said though, to acquire the items, they would first have to level up their professions, collect materials, and craft them. There’s also the option to buy them from the Auction House, but being broke sometimes prevents that. As a result, there are times where some players would rather buy all of the items that they need in third-party marketplaces using real money. By doing so, they’ll be able to save their in-game currency for things that are more important instead.

Long thought to be extinct in Azeroth, they are a race of dragons who fall under specific Aspects. There are 5 major ones indicated by their colors: red (Life), blue (Magic), green (Dreams), bronze (Time), and black (Authority*). Each aspect has a leader, though some leaders have been replaced through the years because of various circumstances.

*Black Dragonflights were given dominion over the earth, but they were easily corrupted by the Old Gods and nearly driven to extinction by Wrathion.

Through the years, those with ill intentions have dabbled in experiments concerning them, which resulted in offshoots. Other branches came about more naturally from corruption or environmental influence. They’re still Dragonflights in some aspects, but perhaps as lesser ones. You’ll see some offshoots in Blackrock Spire, the Emerald Nightmare, and the Twilight Caverns. Other related creatures are Dragonspawn, Draknoids, Dragonman, Drakadons, and Undead Dragonkin.

As it turns out, the problems plaguing the race can be alleviated if they return to their homeland on the Dragon Isles. Aside from the mentioned near-extinction, other Dragonflights couldn’t reproduce, and the ongoing corruption of other aspects doesn’t help. Returning should revitalize the race, though, of course, that’s easier said than done.

Aside from the new location, the expansion also promises many new features. There’s an additional heroic class, the Dracthyr Evoker. Players can also ride dragons! The talent system gets an extensive overhaul, and some professions have upgrades. There are quality-of-life changes to the UI as a whole, too.

Getting your own equipment and items can be tedious. The repetitive actions and grinding could grate on nerves, especially after hours of doing it. Buyers can skip all that by buying whatever they need from online sellers. After a short transaction, their items get delivered, and they can do any activity they want. Whether that means raiding, questing, achievement hunting, or reputation farming, their new stuff would help.

Another reason would be needing help getting specific rare items. Some sellers would offer to accompany their buyer to get it, as usually, rare things are bound to the character who picks them up.

Which WoW Dragonflight Items to Buy

Though this is a new expansion, here are some classic items that any player would need no matter the time and place:

WoW Dragonflight even adds more items to the fold, such as:

Have Fun and Enjoy WoW Dragonflight!

Buyers and their newly-bought items can enjoy the expansion without having to worry about farming or where to get better equipment. Jumping straight to the meat of the content isn’t a problem, and they’d enjoy the game more than if the alternative happened.

Also, they get the best deals and the quickest delivery times from a reliable online trading platform. One with a bustling community, excellent security, and sellers who keep fair prices is the best way to get these items. Whatever buyers will use the items for, they can get everything they want or need from the online marketplace.

Keep on playing World of Warcraft Dragonflight, and enjoy the new items!

Sell Your Products
About WoW Items

Although visitors are likely to buy WoW Dragonflight items, it’s nice to know the rarest things in the game. Then they can try finding them in the listings of online marketplaces. A seller might not realize what kind of treasure they have.

Here are three of the rarest items in the game, in no particular order.

This longsword made out of literal flame is found in the Molten Core raid or pickpocketed from enemies in the Black Rock Depths and Lower Black Rock Spire. It has such a low drop rate it sells for millions of gold in the AH out of sheer scarcity. Though it’s a BoE, many people want it for the cool factor.

There’s a successor called Teebu’s Scorching Straight Sword that looks more like a jet engine spurting flame. It has a slightly higher drop rate, which some players would settle for. However, many collectors would still prefer the former.

Everybody knows turtles are slow, but players flock to the fishing nodes to get this mount. Even though it runs at 60% speed on land and can’t fly, it’s one of the fastest swimmers. The other cooler ones might be better on land or air, but they can’t beat this adorable Sea Turtle in the water. Note that this differs from the Purple Riding Turtle, which was added in a later patch.

It’s an iridescent sword once available during the game’s Vanilla days. Classic makes it open again, but in Retail, it is unfortunately in low supply. It came from the Elite mob Scale Belly in the Cape of Stranglethorn.

Good luck trying to get it, even if it were available now. It would become a hotspot for farmers and many spawn campers who want to get this sword.

Of course, they could be rare because they’re not very useful to raiders or PvP enthusiasts. They’re primarily for collectors and those who want the bragging rights from owning them.

Looking at something more practical, here are some additions from the WoW Dragonflight expansion.

There’s a new category of drops in raids starting from this expansion. They’re called Very Rare drops and have higher item levels than the usual rewards. This comes from some bosses in the Vault of Incarnates raid.

A leak from the beta shows four of them:

Because of their designation, they’re sure to be bound on pick up, which means one can’t buy these WoW Dragonflight items. Still, there’s always a way for those persistent enough.

Whatever buyers need or want, they can enjoy the game with all kinds of items. They’ll find it all on the online marketplace, whether consumables, equipment, resources, or mounts.

It’s amazing how World of Warcraft has been open for exploration for almost two decades, and now, with the release of WoW Dragonflight, there are more items to grind for then ever. With new things coming in the form of expansions now and then, Azeroth isn’t going away anytime soon. Keeping that in mind, this resulted in the game building up a collection of thousands of items. The history of World of Warcraft has always been riddled with absurdly low drop rates, especially for rare items and equipment. While things aren’t as bad when compared to the drop rates during the MMO’s first few expansions, it’s still pretty tough to get some of the more elusive items in World of Warcraft. There are even items that are so rarely seen in the game that they can even draw crowds of people when they see someone equipping them.

Read more
PlayerAuctions is an independent player-to-player marketplace for buying and selling virtual video game property. PlayerAuctions is NOT endorsed by, directly affiliated with, maintained, authorized, or sponsored by World of Warcraft: Dragonflight or its trademark owner.
Select server and Faction
We use cookies and similar technologies on this website. This improves the browsing experience for you and enables us to tailor better products and services to you. Cookies are stored locally on your computer or mobile device. To accept cookies either click "Accept Cookies", or continue to browse as normal. Cookie Policy