Buy WoW Classic WotLK gold from a trusted marketplace at the best prices. Wrath Classic gold is in short supply - players should make sure to buy while prices are low. Browse thousands of offers from verified WotLK sellers with the best service. Stock is available on every WotLK Classic server with guaranteed offers and fast delivery. 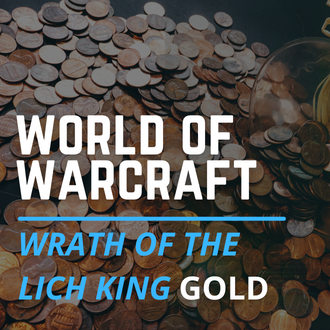 With the addition of the Death Knight class and level cap increase, there’s a lot for both new and old players to do in Wrath of the Lich King Classic. Besides doing quests and raids, they’ll have to replace the gear they’ve accumulated from the Burning Crusade Classic expansion as well. If players want to make the process of acquiring the best gear and mounts easier, they can opt to buy WoW Classic WotLK gold to get everything they need for their character. BoE pre-raid BiS items will be easy to acquire with a healthy stockpile of gold.

Blizzard added “fresh start” servers for Wrath of the Lich King Classic to avoid making people feel like they're late to the party. These servers aim to let players create a new character from the ground up and build a community with people on the same boat, experiencing the WotLK expansion on an even footing.

Gold is crucial in WotLK Classic, especially for gamers starting World of Warcraft for the first time or planning to make a new character on a fresh start server. They’ll need the currency to do even just the most basic things. For starters, they’ll need to pay 1,000 gold to unlock Cold Weather Flying—this mechanic is needed if they want to get through the snowy terrain in Northrend. If they’re thinking of using two talents for their character, they’ll have to cough up another 1,000 gold to get a Dual Talent Specialization from a Class Trainer. Then if they want the Traveler’s Tundra Mammoth to be able to carry more passengers, players need to have 20,000 just to get the mount.

WotLK Classic will introduce a brand new tier of raiding and players who want to progress as efficiently as possible will want to browse WotLK Gold offers from trusted sellers. Critical progression gates such as consumables, pre-raid BiS gear, quests are locked behind resource constraints and have enough gold will be critical for players to unlock and progress through the endgame. Raid preparation is both time and resource intensive; not to mention the hard gold sinks such as Cold Weather Flying. WotLK was the expansion where gold inflation reached its apex and the presence of gold gating in the endgame was extremely prevalent, that being the case, buyers should stock up on enough gold to not lock themselves out of neccessary features.

Why Should Players Buy WotLK Classic Gold from an Online Marketplace

Instead of browsing obscure forums for WotLK Gold offers, players should instead check a trusted online marketplace for their gold requirements. Offers are backed by customer service, dispute mediation, and verification systems. Buyers can also enjoy fast delivery times - in under twenty minute - from fast sellers who have stock on every WotLK server, even the Fresh Start ones.

Good seller. A delay in message delivery caused a misunderstanding. All good now

The grind has never been more arduous than in WoW Classic WotLK. Between leveling professions, acquiring pre-raid BiS, consumables, repairs and cold-weather flying players can often feel like they never have enough. These are some of the reasons players buy WoW Classic WotLK Gold, we'll go over each of them below. It's difficult for players to have too much WotLK Gold, there's just simply too many gold-sinks in place. Unless buyers want to invest dozens of hours purely in gold-farming, it's just not time efficient to do organically, which is why players take advantage of offers on trusted Wrath Gold marketplaces.

With the introduction of a new profession, Inscription, and the raising of profession level caps, leveling all professions have become significantly more expensive in WoW Classic WotLK. If players don't want to spend gold, they can choose to spend their time farming mats instead, which can be severely time prohibitive. Leveling just one profession to the level cap can take upwards of a day of continuous in-game playtime. Buyers can skip most of this grind by buying WoW Classic WotLK gold and simply purchasing the mats they require from the auction house.

Prior to raiding, players can optimize their builds by attaining their class and roles pre-Raid BiS, that is to say, the best pre-raid armor and weapons they can acquire. Many parties and raid groups require pre-Raid BiS to participate in first raid teams. Players can ignore the grind, which can be extremely time intensive, by simply buying their pre-raid BiS gear with gold instead.

From flasks to potions to foods, by WotLK Classic, consumables have been a core and required part of both raid builds and DPS rotations. Combat flasks are neccessary for certain classes to maximize their DPS during damage check phases in certain raids. With enrage timers more abundant than ever in WotLK Classic, any advantage players can get is needed. Buyers will never run out of consumables by buying WotLK Classic Gold from a trusted seller.

To fly in Northrend, players need to purchase Cold Weather Flying and the cost is a staggering 1,000 gold. Instead of grinding mobs and mats to sell on the Auction House in the hopes that the market isn't oversaturated, players can instead buy gold from a trusted seller directly and skip this lengthy grind. Northrend looks better from above.
PlayerGuardian Buyer Protections