The Cycle: Frontier What Items to Sell

The Cycle: Frontier’s gameplay revolves around raiding the alien planet, Fortuna III, for its resources while trying to fend off its hostile wildlife and other players. If players want to survive the harsh challenges awaiting in Fortuna III, they need to have gear to protect themselves, and the only way to get those is by buying them.

Krypto Marks, or commonly called K-Marks, is the game’s top currency. It is used for buying most The Cycle: Frontier items. K-Marks are used to buy weapons, upgrade quarters, craft, and salvage items. There is no short supply of K-Marks available for players who play well. The game has quests and jobs that reward players with a decent amount of K-Marks.

Players can also sell whatever they looted in Fortuna III for K-Marks. Every time players finish a run, they will likely have a haul of items with them. Looting and then selling loot is the most consistent way to earn K-Marks.

What items to sell?

Each The Cycle: Frontier item will have a specific sell value. As with most games, rarer items fetch for a lot more when sold. However, less rare items will be more abundant than those with higher rarity.

Selling items also increases a player’s Reputation Level towards the faction where they sold their items. Increasing a faction's Reputation level unlocks more items in that faction’s shop, which can be useful towards later stages of the game.

In the early game, one of the best items to sell is ores. Fortuna III has an abundance of ores available for players to mine. There are four kinds of ore in the game: Nickel, Veltecite, Titan Ore, and Focus Crystal. These ores also have different tiers of rarity among them.

Titan Ores mining nodes are scattered around Fortuna III, but are much less abundant than Nickel and Veltecite. Titan Ore mining nodes are common around the Dig Site and Abandoned Mine areas.

Focus Crystals can only be found in the Jungle. They fetch the highest price among the ores. However, the Jungle is not the safest place to be for newer players. The Jungle has a lot of Marauders roaming around, so it’s best to be careful in these parts.

Players will always have a pickaxe to harvest thEe minerals from mining nodes. However, there are also better tools for mining, such as the Korolev Heavy Mining Tool. Be careful though; these tools are loud, which can alert other players of your position.

Here is a list of the ores and their sell value:

In Fortuna III, players will encounter creatures that will attack once they detect a player. Killing these monsters will drop parts of their body as loot, which means the loot from these monsters is accessible to most players. These materials will earn players K-Marks when sold. There are five kinds of monsters roaming around Fortuna III: Striders, Ticks, Rattlers, Marauders, and Crushers.

The easiest enemies to take down are Striders and Ticks. They don’t have much health and armor, so they die with a small amount of damage. Striders often move in groups, and once they see a player, they will alert nearby Striders to attack the player. Ticks are also found in groups. They move fast and will explode when they come in contact with a player.

Quick tip for taking them down: Striders and Ticks can be killed with one heavy swing of a player’s melee weapon. Players can crouch, walk towards their back and take them down with one hit. This saves players ammo, and makes less noise when compared to gunfire. However, be careful of Ticks because they will explode when they die.

Rattlers are trickier to deal with. They have Armor and higher HP and have two different attacks. When near a player, Rattlers will lunge and hit players with their stingers. Rattlers sometimes move away from a player to use their ranged attack: an acid spray shot like a beam towards a player. The ranged attack can kill players with common rarity armor or below if they don’t move away from the beam. However, Rattlers have two weak spots that are colored yellow on their front side. Shooting these deals more damage and can stagger them when they are attacking.

Marauders are strong and quick creatures with a melee and ranged attack. When a Marauder sees a player, they will quickly chase them and slash at them with their claws. Their ranged attack will have them spit toward the player. The spit leaves behind a pool of acid that slows and damages players. When doing a melee attack, Marauders will briefly open their mouths, which players can shoot to deal more damage and stagger the Marauder.

Crushers are the strongest creatures in the game currently. They are big creatures with rock-like skin. They will punch players that stray too near or grab a piece of the ground to throw at them if they wander too far. Crushers have a glowing pink area on their feet which players can shoot to bring down a Crusher. When downed, players can shoot at the weak spot on its back for more damage.

Here are the materials that these enemies can drop:

Whenever you have an abundance of a certain item, you can always sell them. Don’t hoard it all, especially when you have no more funds left. Materials commonly found like Hardened Metals or Brightcap Mushrooms can be sold when there’s no use for them. However, always keep a single stack of items available just in case they’re needed for crafting or for quest and job deliverables.

Loot your way through Fortuna III and make a fortune out of selling The Cycle: Frontier items! 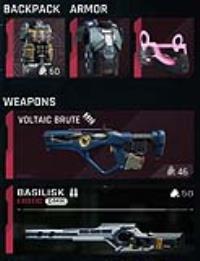