Guns at the ready! In the world of Fortuna III, guns are a prospector’s best friend. The Cycle: Frontier features the alien planet of Fortuna III, where players can collect materials as much as they want. However, players must fend off vicious alien creatures and other ambitious players. Guns will be the answer to those problems. These are The Cycle: Frontier's Best Guns.

The Cycle: Frontier has a variety of guns to choose from, each with its rarity. The game classifies its guns into these categories: Pistols, Sub-Machine Guns (SMGs), Light Machine Guns (LMGs), Designated Marksman Rifles (DMRs), Assault Rifles (ARs), Snipers, Shotguns, and Launchers. There are five types of ammo: Light, Medium, Heavy, Shotgun, and Special Ammo. Each gun will have a specific ammo type that it will use.

Before players venture into the world of Fortuna III, they can customize their loadout while aboard the Prospector’s Station. Players can bring up to two weapons as they drop to hunt for materials. In this The Cycle: Frontier guns guide, we will explore all the different guns available and which ones to take on your journey. Remember to bring the required ammo and wear armor to survive better.

Each gun in the game has its tier of quality, damage, and penetration stats. Of course, higher-quality weapons will have better stats, but they will only be available as players progress further into the game. The text and background color of a gun’s description and image determines its quality. Here’s a quick list of the quality tiers in the game:

Damage and penetration are a gun’s main stats. Damage is pretty straightforward; the value of the damage stat translates to its damage per bullet, except for shotguns. A shotgun's damage stat is the total damage an enemy will receive if all the shotgun pellets hit.

Guns are available in the shops on the Prospector’s Station in exchange for K-Marks. There are four different shops at the station. First is the Quick Shop, where players can buy gear and weapons of Common rarity. This shop is where new players can buy all the gear they need for their journey in Fortuna III.

The other three shops are housed in the building of the factions in the game: ICA, Korolev, and Osiris. Each shop will have something unique to offer aside from the usual gear. Each shop will also offer its own set of weapons available for purchase. Items in the faction shops are unlocked as they increase the Reputation Level for each faction by completing quests or selling items.

Here’s a quick rundown of all the guns available in the game, sorted by which shop sells them:

It would be unfair to rank all these guns based on their power. If that were the case, all the highest-tier weapons would be the best. For this The Cycle: Frontier guns guide, we will base the list on a player’s progress. This list will show the best guns for the early, mid, and late games.

Best Guns for the Early Game

Players might find it hard to progress when starting out because of the nature of PvPvE combat in The Cycle: Frontier. Players need to pick up on the skills and knowledge of the game quickly if they want to survive the harsh world of Fortuna III.

During the early game, there are a few gun choices for players. Unless a player has leveled up the factions to the required level to purchase the Uncommon rarity guns that the shops offer, they are stuck to using the Common rarity weapons available in the Quick Shop. These guns may not be high quality, but some of them are strong in the early stages of the game.

Among the guns available in the Quick Shop, the C32 Bolt Action is currently the strongest gun. It can take down other prospectors with two shots at 100% damage. However, the C32 Bolt Action costs much higher than the other Common rarity guns. Players with the funds can purchase this gun for that extra player-hunting power. The problem with the C32 is that it has disappointing iron sights, so make sure to equip it with a 2x or higher sight attachment. It’s also bad at close-range combat, so you need to take another gun in case of close-range encounters.

The best gun to have in your loadout is the B9 Trenchgun. In Fortuna III, most combat will be at close range, which means shotguns like the B9 Trenchgun will be a lifesaver. It deals high damage as long as the enemy is within its range. It has a high spread, but when all the pellets hit, it deals a whopping 64 damage, more than a single bullet from the C32 Bolt Action. It’s also effective against most creatures found on Fortuna III. Having a B9 Trenchgun alone can help a player safely survive their ventures.

Another good choice for a weapon is the AR-55 Autorifle. It’s a versatile gun; it’s decent at close to mid-range flights. It has a reasonable fire rate and can quickly take down enemies that are caught unaware. Take this gun if you are confident with your aim.

The Bulldog is the first unlockable gun from the ICA shop. It costs a lot in the early game, but its effectiveness at close range is tremendous. With all pellets hitting, it deals 60 damage, enough to take down enemies wearing white to blue armor with only two shots. It’s only great at close-range, so be careful when fighting in mid-range. This gun can carry players well into the mid-game.

Best Guns for the Mid Game

Once players have progressed a bit more into the game, they can purchase weapons of higher quality. These guns will be great at dealing with enemies and players with tougher armor. They generally deal more damage as well when compared to lower-quality weapons.

Osiris’ Phasic Lancer is a strong gun with great accuracy. The three-shot bursts are still accurate even at long range, which makes them effective at any range. It only takes about four bursts of shots to defeat enemies with epic rarity armor. The price is reasonable for the power that the Phasic Lancer has once players reach the progress required to unlock it.

The ICA’s Shattergun is arguably the best shotgun available in the game regarding power and cost efficiency. This gun can take down enemies wearing uncommon to epic armor with only two shots. It can also take down those intimidating Marauders with two shots to its weak spot. However, it falls off at longer ranges, so be careful.

Best Guns for the Late Game

The late game is a terrifying battlefield because players will be armed with powerful gear, and the hostile creatures on Fortuna III will be much stronger. Getting to this point will take a lot of players' hard work and careful gameplay.

The Kinetic Arbiter is the weapon of choice for hunting down players in the late game. Each shot packs a wallop, which is sure to take down enemies with blue armor or under in just one shot. The Kinetic Arbiter costs a lot, but it's cost-efficient when taking down other prospectors. Be careful against other players carrying this gun even if you’re wearing exotic rarity armor; it can still take you down with two to three shots if you’re not careful.

The Voltaic Brute is the best choice for close-range combat in the late game. Its rapid-fire rate can kill enemies in seconds with a full magazine. It can still be effective at mid-range with suitable attachments and, of course, good aim. It has good damage per bullet and magazine size for an SMG, and its penetration ensures enemies with exotic armor aren’t safe. It’s also considerably cheaper than the Kinetic Arbiter.

You’ll love the Hammer from Korolev’s shop if you're a pistol enjoyer. It’s like a cannon on the palm of your hand. The Hammer’s shots hit like a truck for a pistol. It may have lower damage than DMRs and Snipers but has a faster fire rate, so it just evens out. The Hammer is also accurate at mid to close range, but it lacks sight customization, so players must get used to its iron sights.

Take note that guns can also be equipped with attachments that improve their performance. Attachments can improve recoil, reload time, equipping time, and sights. Utilize the attachments available to make your weapon more efficient. Prepare your loadout and devastate your enemies in the world of Fortuna III with this The Cycle: Frontier guns guide! 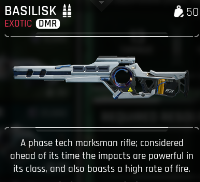 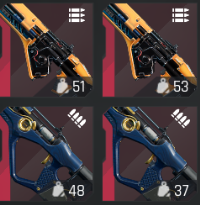