Tired of playing the same God over and over again but just can’t buy more? Players can buy Smite Gems and get instant access to more pantheons. Use the gems to buy Tsukuyomi or Bellona! Buy King Arthur a Pendragon skin or a Night Watch skin for Heimdallr. Buy more gods and cosmetics by acquiring more Smite Gems! 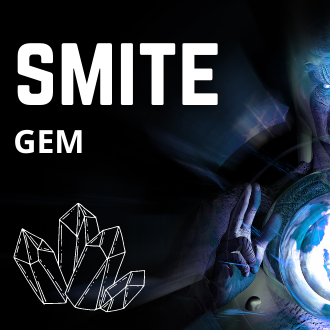 Gems are the premium currency used in Smite to unlock certain gods and cosmetic items for a player’s character. With so many gods being added to the MOBA through updates, players find themselves scrambling for the required number of gems to have the latest god. Meanwhile, optional cosmetic gear is available for purchase; they don’t offer any additional stat bonuses or whatnot, but they make the characters look great. If gamers want to secure themselves all of the latest goodies in Smite, they’ll have to spend an absurd amount of Gems.

While players can earn Gems while playing the game, it’s nearly not enough to cover their shopping list. If they’re strapped on Gems, there’s always the option to get what’s needed by purchasing Gems from a third-party marketplace.

Gems vs. Favor: What’s the Difference?

There are two currencies in Smite: Gems and Favor. Gems are the rarest of the two and can be purchased with real money. Players can get small amounts of it through daily logins and rewards, and it’s the currency used for getting the “valuable stuff” in the game. If spent wisely, they can unlock more features during seasons and participate in exclusive game modes that would otherwise cost them money from buying in the in-game store.

Meanwhile, Favor can’t be bought with real money; buyers must earn them by playing Smite. Thankfully, there are many ways to earn it, such as availing rewards, completing quests, etc. Compared to Gems, Favor isn’t as impactful to the game since there’s lots of stuff that players can’t buy.

Spending Gems on A Battle Pass

If players want to get their money’s worth on Smite, they can purchase Smite’s seasonal Battle Pass for 600 Gems. Depending on their playtime, players can acquire skins and treasure chests that can easily be worth more than twice what they paid for the Battle Pass. But before doing so, they should make sure to check the date on when the season ends. If they purchase the Battle Pass just a few days after a new season arrives, they might not have enough time to complete it and get all the available rewards. It’s recommended that players get the Battle Pass just as a season starts. That way, they have lots of time to spare.

Legit. Got my order in ten minutes!

Even though it didn't work as intended the seller was very courtous.

Fast and Easy, was skeptical at first my go to from now on!