There are a lot of stats to dive into when players are shopping for their next set of wheels. With over 420 cars available at launch and 60 tracks on which to rev up those engines, gamers are going to need all the Gran Turismo 7 credits they can get to upgrade, dress up, and purchase their dream vehicles! 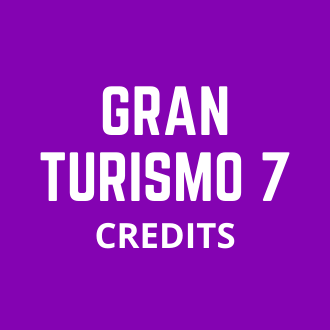 What are Gran Turismo 7 Credits?

Credits, or CR for short, is the main currency that’s used in all Gran Turismo games. Players can use it to purchase vehicles, customize their appearance, enter test facilities, upgrade their cars with tuning parts, and perform maintenance. To obtain Credits, one must participate in races – higher place finishes award larger amounts of Credits or unused and prized vehicles.

Note that Credits in Gran Turismo are always roughly based on the local currency in the region in which the game was sold. If buyers bought the Japanese version of Gran Turismo 7, 1 Credit will be equivalent to 1 yen. If they instead bought the North American version, 1 Credit is similar to 1 USD. As for the PAL versions, despite using Australian Dollars, British Pounds, or European Euros (depending on where the player is situated), all of them use the same currency format as the North American versions of GT7.

Where to Spend Credits in Gran Turismo 7

As stated previously, there are numerous ways for players to spend their Credits on GT7, but by far the main reason why players buy in-game currency from marketplaces is to buy more cars. There are more than 60 automobile brands in the game, including vintage vehicles that belong in the ‘80s and ‘90s. Plus, since Gran Turismo 7 now has a massive garage that players can take advantage of, they can store up to 1,000 cars free of charge. Considering that there are 420 cars available at launch, players can expect more to be added down the line as the developers update the game. After all, why would they decide to include a garage that can house 1,000 cars if there’s not enough of them in the racing sim in the first place?

Looking At the Performance Rating

When players begin their campaign, they’ll be given enough in-game Credits to pick up their very first car. The car they buy won’t be fast enough to break any lap records, but at the very least, it puts them behind the wheel and gets them racing. Just like in Gran Turismo 6, every car in GT7 has a Performance Points rating. Every car has different weights and levels of engine power and handling, and the Performance Points (PP) ratings are the best way to quickly judge which cars are generally better than others. This means that buyers will more likely purchase vehicles that have higher PP with their Credits.

Having all the cars in Gran Turismo 7 may indeed be a feat that can’t be achieved so easily, but what happens after that? The next step is to upgrade them, of course! Vehicles in GT7, for the most part, are nice to look at, but driving them can be a different thing altogether. This is why players also head over to the Tuning Shop to get their fix of tuning parts. New brakes, suspensions, tires – they’ve got it all. The shop can fine-tune almost every car in the game, including the “discontinued” variants.

There’s also the GT Auto in which players can glam up their car. The original colors and shades of certain vehicles may be up to par for some, but what if they wanted to go for another style? Well, they can certainly make their dream car their own in the GT Auto, as long as they have the necessary Credits to pay for it. There are over 130 wheels and 600 aero parts available in Gran Turismo 7, with more to be added in the future.

As players slowly fill out their collection of classic and modern cars, they’ll be needing all the Gran Turismo 7 Credits they can get, especially when they’re planning to do some upgrades on all of them. Sellers can provide the in-game currency for these buyers in need; not only are they helping them achieve their goals in the game, but they’re also giving other gamers that don’t have as much time to farm Credits a chance to own the car of their dreams.

Read more
PlayerAuctions is an independent player-to-player marketplace for buying and selling virtual video game property. PlayerAuctions is NOT endorsed by, directly affiliated with, maintained, authorized, or sponsored by Gran Turismo 7 or its trademark owner.
Select server and Faction
We use cookies and similar technologies on this website. This improves the browsing experience for you and enables us to tailor better products and services to you. Cookies are stored locally on your computer or mobile device. To accept cookies either click "Accept Cookies", or continue to browse as normal. Cookie Policy